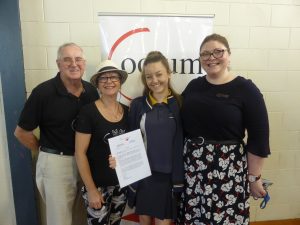 Paige recently auditioned and competed at the World Championships of Performing Arts in New York City where she completed a four-week musical theatre course.  The musical theatre programme was run for students through the New York Film Academy to help develop their dance, acting and singing skills.  Having been awarded this $1,000 Bursary will enable Paige to pursue her dream of a career in musical theatre.  She is looking at attending a course at the Western Australian Academy of Performing Arts (WAAPA), Australia’s premier performing arts academy.

“The musical theatre programme through the New York Film Academy was a really good experience;  not just for Broadway and training, but also life experience.  I’ve always been singing and dancing but I got really into it after I saw my first musical.  I can’t imagine doing anything else with my life.  New York really reignited that passion.  Now thanks to Coolum Theatre Players, with this Bursary I’m one step closer”, Paige said.